On this page you will find additional guides and resources for better understanding audio or more advanced techniques of editing audio.

Generally, as a rule, always use WAV(E) or FLAC (lossless uncompressed or compressed) files as sources for your songs This is because lossy formats like MP3, AAC or OGG always lose information when converted to their formats and cannot be restored by 'un-converting'. This is why you should never use your exported OGG-file to make new edits to your audio. Therefore, always use a lossless source file, if possible. However, some FLAC sources could be 'up-converted' from lossy formats, so using a spectral analyser tool to check your audio file(s) before using them is a recommended practice. For more information on audio formats this article is recommendedopen in new window.

Save your own lossless WAV(E) files when doing edits, at each step, so you always have a lossless source to continue editing from without having to redo everything from the start.

The best way to check for source quality and quality loss is using Spekopen in new window, a free acoustic spectrum analyser tool: 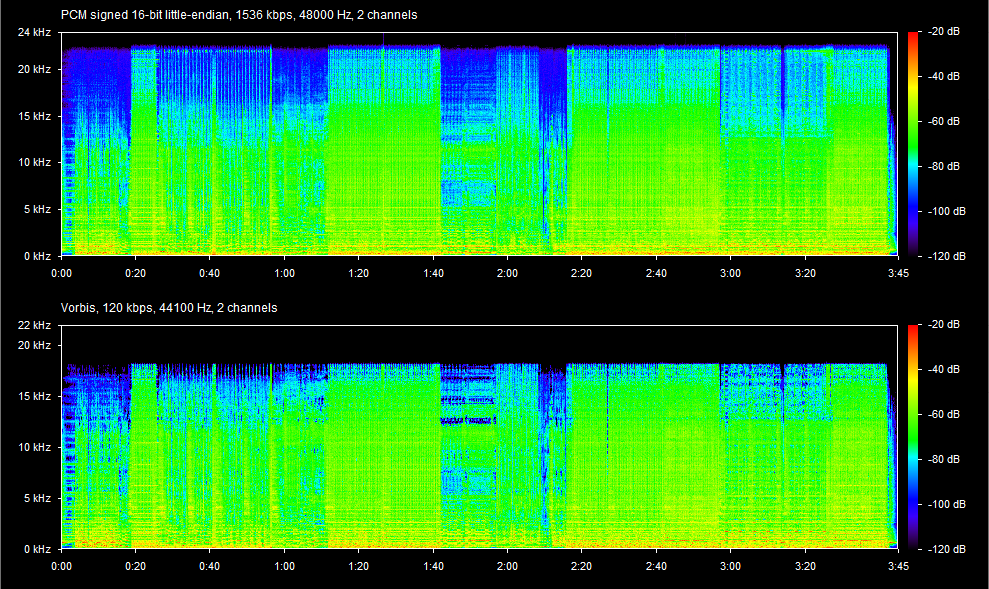 How to spot low quality:

These two characteristics are what you can look for this when analysing your source sound files. For more info on spectrum analysis this article is recommendedopen in new window.

To use this tool simply open Spek.exe then drag and drop the audio file from file explorer into the Spek window. You can resize the window for more detail in the graph.

You should aim at preserving most of the source audio data while still having the smallest file size. Keep OGG file size under 14MB (for BeatSaver) or 7MB (for Discord without Nitro).

To know what level is ideal for your song you can export your track with different qualities and compare the spectrals. However, as a general recommendation follow these settings:

You can’t increase audio quality by saving a lossy track with a higher bitrate (e.g. saving a YouTube-sourced track with level 10 quality), you will only bloat the file size. As explained in the previous chapter, information is lost when transcoding to any lossy format and thus can’t be restored. Transcoding one lossless format to another lossless format is fine though, e.g. FLAC to WAV(E).

To work with audio and do processing of the soundwaves there are several tools available to help achieve what we want or need. Two of these tools used are Compressor and Limiter which we used for volume processing in Volume Modification: Making Your Song Louder.

Below these tools are explained in more detail:

In essence, a Compressor reduces the dynamics above a certain threshold, ultimately making the audio signal less dynamic and lower in volume. When also boosting the signal after a compressor (Make Up Gain/Normalize) you can make the sound be perceived even louder.

The Compressor effect shipped with Audacity is actually not the best tool for music mastering because it is made for more speech oriented audio. However, it is very simple to use which is why it is used in Volume Modification: Compression and basic settings are provided that work for most cases. However, if you're reading this you either noticed an unpleasant distortion in the sound (the sound cuts out a bit after loud peaks) or you're curious about the settings you can adjust in a compressor, so let's take a look at those settings using the more advanced SC4 plug-inopen in new window for Audacity (you may need to install the LADSPA bundleopen in new window to get access to this tool). 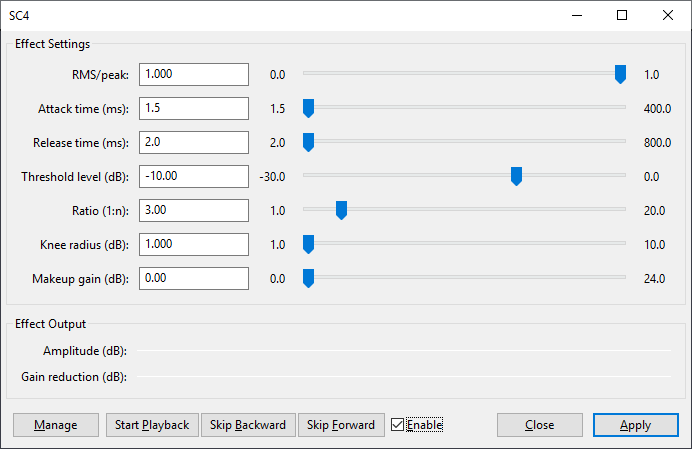 An example of how compression affects the audio, highlighted part has been compressed at 1:3 ratio with a threshold at -30db (red line). 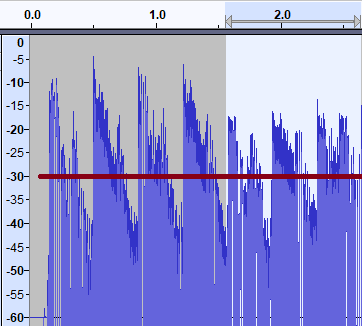 To make it easier to visually judge the dynamics of the song in dB you can set the threshold at do the following:

More in-depth information about compressors can be found hereopen in new window.

A limiter is in essence a compressor effect with an infinite gain reduction ratio, terminating any signal from going above the threshold. It means a Limiter is useful for cutting off the peaks of a waveform and making the audio be perceived even louder. 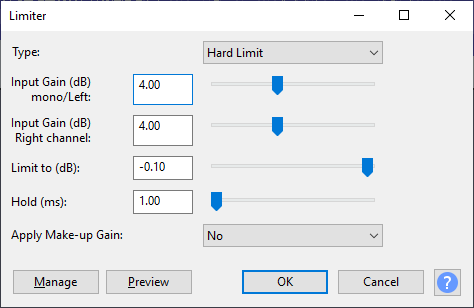 More in-depth information about limiters can be found hereopen in new window.

When editing a shorter version of a song and a simple hard immediate cut between two similar sections of a song isn’t enough to convince your ears (usually the sections aren’t perfectly the same, usually in non-electronic music) then applying a cross-fade between the sections usually helps. Any type of restructuring editing is easier in a DAW software that uses beat grid editing, but it is possible to do the same in the free software of Audacity as well, which we will show here.

For those who don’t know, a cross-fade is when one audio track fades out while another simultaneously fades in. For the best results, find identical or near-identical sections on each end of the region you want to cut. Instrumental regions in electronic music are better suited than regions with vocals. Using the smallest segment possible, particularly a small section between two peaks/beats, is better to convince a listener.

There is also a video of this process available hereopen in new window.

To crossfade two sections of a song do the following:

Utilize a Click Track to make sure the tracks are in time with each other.
See Audio Preparation: Adding Click Track.

then later back to +0db after the crossfade has been applied. Double click the fader to type in the number.

If the song you’re trying to map has a tempo that doesn’t sync up with a fixed BPM (as in, even with BPM values with decimals), such as (older) acoustic pop, rock or metal songs, they were most likely not recorded to a metronome and will thus not easily sync up to a fixed BPM in Audacity or the map editor. This takes a lot of time and patience, so make sure it's worth the extra effort as some solutions involve brute force by manually adjusting the BPM (tempo track) at intervals, sometimes every beat, to fit the song.

There are several methods to go about handling variable BPM:

Reaperopen in new window is a DAW (Digital Audio Workstation) that has a permanent free trial and is a great alternative to expensive professional software such as Ableton Liveopen in new window. If you have and are comfortable with Ableton, you should use it instead of Reaper.

Here we will be using its warp feature to subtly adjust the audio to a consistent tempo. Reducing the amount of BPM changes you will need to set in editor. This is a critical step! You can ruin your audio if you do not set the initial BPM and Timebase settings correctly!

Now the important part. We are going to warp the audio to land perfectly on the BPM we set in the Project Settings.

You should notice peaks around where the main drum beats are. On a song with consistent BPM, those peaks will land exactly on the beat markers. For your song, the peaks will eventually drift away from those beat markers.

When they do, you will need to:

Warping your song is simply a matter of repeating this for the whole song. You should start by doing this every 4 beats or so. Most of the time this is good enough to line up the whole song but, keep an eye out for beats in between stretch markers. If they start drifting, use another stretch marker to fix it.

Excessive warps could introduce artifacts or significantly alter the song that it is noticeable by listeners/players.

# Things to Keep in Mind

There can be many hidden "gochas" when warping a song. Here are some things you might encounter and their possible solutions. Once you are done editing your audio, you will want to render it as a .ogg file that Beat Saber can use. Content in this section is derived from guides by Nik, LittleAsi, and Ris who adapted Heisenberg_IRL's method of warping in Ableton. Additional edits by Kolezan.